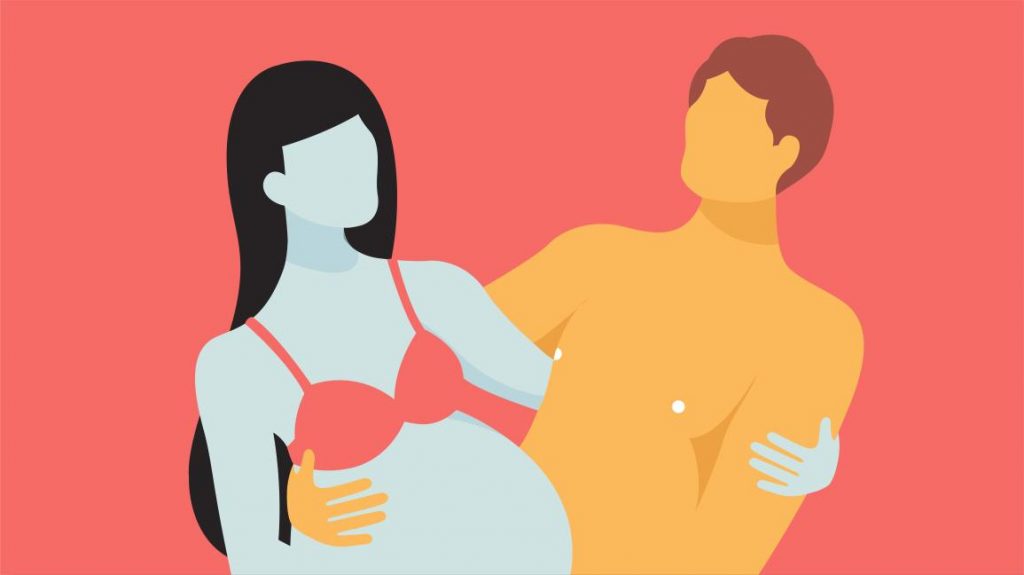 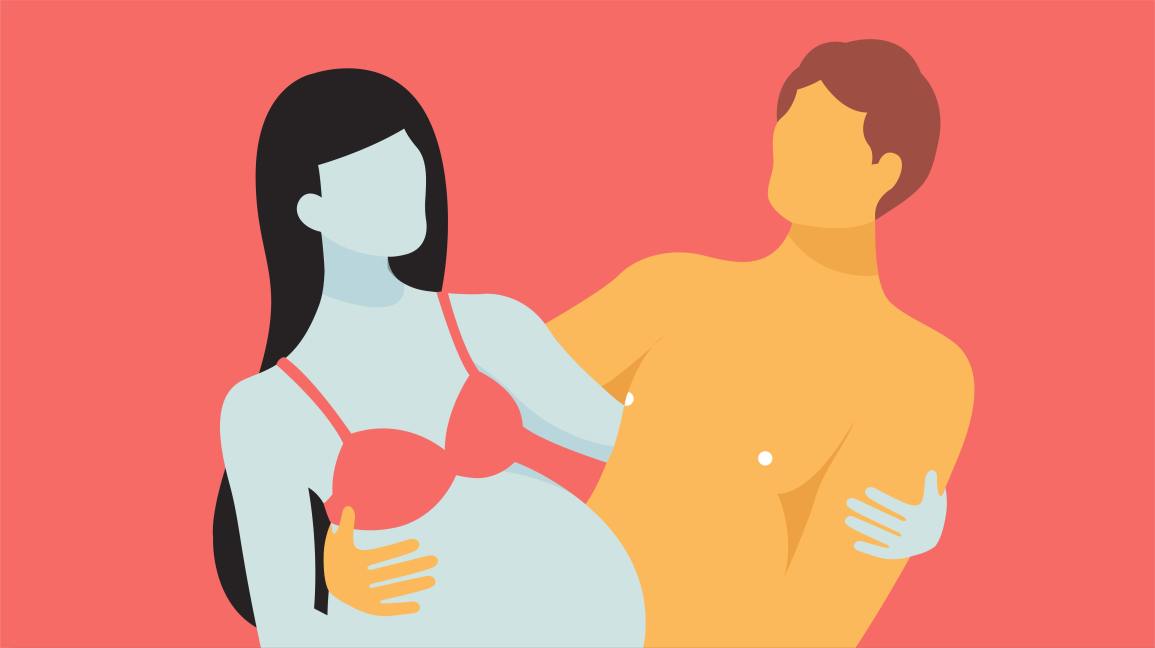 There are many rumors and legends about the harm of having sex while pregnant. And, of course, this “news” is very frightening to the future mother who sincerely worries about the health of her baby. Sometimes, it happens that a woman, after having read or listened to all sorts of “horror stories,” seriously thinks about imposing a complete taboo on having sex during pregnancy. In fact, any statements regarding the fact that a pregnant woman shouldn’t have sex are based either on ethical (more accurately, questionably ethical), or on certain religious beliefs. There are not so many real medical contraindications to sexual intercourse during pregnancy, in addition, they can be easily counted on the fingers of one hand.

As the knowledge about the processes taking place in the body of the pregnant woman has been deepened, the views of doctors on sexual relations during this period of a woman’s life have expanded. Today, many experts are sure that harmonious, sex-pleasing relationships not only do not cause harm but contribute to the improvement of the well-being of the pregnant woman and the correct development of the baby. However, myths that have once arisen continue to exist and still affect the lives of families that are waiting for a baby.

Myths and reality about sex while pregnant

Many pregnant women continue having sex, but some other women consider it completely unacceptable and unnatural simply because they are afraid of so many things. It is necessary to say that all these are misconceptions and unfounded fears. In order to understand what the woman can and cannot do, she should just consult a doctor. Nowadays, it is quite normal to ask such personal questions. But first, let’s look at the myths that concern pregnant women having sex.

Myth 1. Sex while pregnant can harm a child.

This is a very vague formulation, but many future parents are afraid that sex will somehow harm the fetus. It is difficult to imagine how exactly: after all, the penis does not reach the organs where the embryo is located. The future child is protected by the fetal waters, the membrane, the uterus and the cervix. The baby needs to stay in a mother’s body for nine months, and such a natural process as sex cannot cause harm.

Future parents shouldn’t think that the child will understand something or notice. When pregnancy proceeds calmly, and a woman is relaxed and happy, then, of course, it is easier for the child to develop. Pregnant sex will not affect the baby in any other way.

Myth 2. You cannot have sex in the first and last trimester of pregnancy.

Actually, you are not only able to do that, but you should do that if, of course, there is no direct prohibition from the gynecologist who is monitoring you. Can you have sex while pregnant? Yes, if there are no factors for abstinence such as the threat of miscarriage, problematic multifetal pregnancy, rupture of membranes, placenta previa and pathogenic diseases. If you see some bleeding after sex while pregnant, it is better to visit your doctor and determine the exact cause. Don’t panic beforehand.

If a doctor does not prohibit, then it is worth using the opportunity. By the way, having sex during pregnancy not only gives pleasure to a woman (blood congestion of genitals increases and, as a result, sensitivity increases either) but also helps her prepare for future labor, maintaining intimate muscles in tone.

The scientists haven’t found any connection between sex and the date of birth. The results of the research have shown that it does not matter how much the pregnant woman makes love. Childbirth comes when the mother and child are ready for it, and not when the couple decides to have sex.

Female orgasm does not induce labor. The uterus is a muscular organ that contracts a little more during orgasm under the action of hormones, it lasts a few seconds. Such a short impact is incommensurable with labor contractions. So, the answer to the main question, “Is it safe to have sex while pregnant?” is yes.

Myth 4. You cannot have oral sex when pregnant.

Besides, there cannot be any harm because of oral sex. Well, it is better to keep from it against the background of toxicosis in the first trimester of pregnancy. If you feel sick, then, of course, do not do that.

Myth 5. You always need a condom when pregnant.

It is impossible to get pregnant again, therefore, a condom is not needed as a contraceptive. It is a different story when a pregnant woman meets a new man, or a regular partner has an infection. In these cases, a condom is always needed and not only during pregnancy.

Myth 6. You cannot use lubricants when pregnant.

The hormonal background of a woman changes greatly during pregnancy, and it may cause dryness in the intimate zone. The natural lubrication is not enough in this situation, so lubricants make life easier. They cannot harm the child because they do not penetrate through the skin and mucous membranes, and they do not reach the amniotic fluid.

Myth 7. Sex will be painful when pregnant.

It’s not really a myth. The woman’s body changes greatly during pregnancy, and it’s not just about the size of the belly. The blood circulation increases in the small pelvis, the organs carry an increased load, the hormonal balance changes. Sometimes, these factors lead to the fact that there is pain or loss of pleasant sensations during sex. Look for new positions, use lubricant, and do not forget about the preliminary caresses.

Many couples think about how to properly have sex, and what positions are better to choose during pregnancy. There is no definitive answer to the question, “How is it correctly and how is it wrong to have sex with pregnant women?” Every pregnant woman having sex is unique, and everything is individual. It is necessary just to choose positions, taking into account the gestational age. In the early stages of pregnancy, almost any position is suitable, whereas you should be careful having sex while pregnant in the last trimester and choose positions in which the belly is not pressed excessively.

Position at an angle. This is an excellent option for sex positions while pregnant even during the final stages. A woman should lie comfortably on her back, bending the knees. The partner should try to get as close to her intimate zone as possible. In this position, there is no pressure not only on the belly but also on the bosom, it is safe and comfortable. This position is considered a variation of the classical good sex positions while pregnant, it is passive, and therefore, it is safe.

Lying on the side position. A woman should lie on any side, and the partner should lie behind. This position is very convenient because a man can caress all the erogenous zones, giving a woman additional satisfaction. Typically, this position is practiced during the second trimester, when a woman’s belly limits other pregnant sex positions.

Doggy style position. It is necessary to note that this position should be practiced with special carefulness. A pregnant woman is on her hands and knees, and the partner should stay comfortably behind her. In this position, the woman should have a good support, for example, on the bed or on the floor with her hands and try to avoid the knee-elbow position. If the gestational age is small, she can put a pillow under her belly, thanks to this she will be very comfortable. Many shops offer special pillows for women who have sex while pregnant. A man will be able to fully control the situation in this position.

Cowgirl position. Perhaps, this is one of the safest and best sex positions when pregnant. The man is on his back, and a woman sits on top. Both partners’ hands should be free, this will stimulate the erogenous zones. Such a position gives an acuity to the sensations because a woman sees his face and can learn about the emotions that he is experiencing. Many couples practice it until the very birth. However, it is worth considering that this position provides a deep penetration, so it should be used with caution.

Half-upright position. This is one of the best sex positions while pregnant, and it shouldn’t be avoided. The woman lies on the bed in such a way that her legs hang slightly from the edge of the bed. The partner kneels and takes a comfortable position between the legs of a pregnant woman. The man takes care of everything and does all the work, and the pregnant woman gets pleasure from caresses.

Man-on-top position on the couch. If you love a man-on-top position, but you are afraid that a man can press hard the belly, you can try this variation of the classic position: the woman lies on her back (on a couch or an armchair), her legs on the floor, and the man kneels in front of her.

Reverse cowgirl position. This is a variation of the position “cowgirl” when a woman is with her back to the man. In this case, she will have the opportunity to get additional stimulation of the clitoris. In addition, a woman can change the tilt of the penis and choose a rhythm that will be maximum comfortable for her. In this position, it is much easier to reach an orgasm.

Sitting on a chair position. A man sits on a chair, and a pregnant woman sits on his knees with her back to the man. This position requires some efforts because only a woman will have to move. Although, a man can help a woman by lifting her buttocks. This position is most convenient in the first trimester of pregnancy.